Magio stans for Marco e Giovanni, Maio and Gio as we are called by friends.

Magio is also the pronunciation of the word Mahjong in our city, Ravenna. Mahjong is a Chinese tile game that was known in Italy centuries ago, when Chinese ships reached the port of Ravenna.Yet nowadays it is unknown almost everywhere, except for some small areas in Romagna. So the story of Mahjong is reminded by the sound of Magio: our tour will start from Ravenna to open to the world and we will bring a little of Ravenna in the world and then we’ll bring back a little of the World in Ravenna. 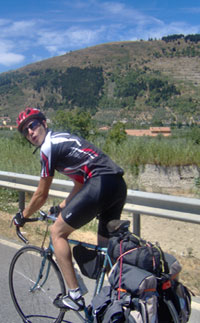 Marco was born in Ravenna, where he grew up and graduated at the Agricultural Institute in 2003. Since his childhood he has always had a strong passion for football and he wears the jersey no.7 in a local team. His first work experience in the harbour of Ravenna didn’t satisfy him, thus he decided to pursue his second passion: nature, trees and soil. He started learning the craft in a horticultural company, then he opened his own business, willing to exploit his skills. 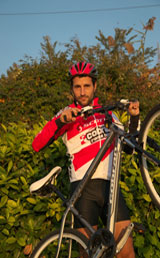 Giovanni was born in Ravenna, where he met Marco. After the diploma in the Scientific high school he moved to Bologna, where he graduated in Economics and Marketin. Then he specialized in Trade Marketing at the University of Parma in 2007. His first significant work experience took place in Parma, when he was employed in Barilla company. But he felt too tight between computers and ties, so he left his job and opened with a friend his own activity, a Beach Resort in Marina di Ravenna, that was most suitable to his personality eager to be among people.

Marco e Giovanni: we grew up together, as neighbors, peers; we met playing football in the same team up to age 18, attending the same class at middle school, and often going out with friends. We’ve traveled together in minor experiences as a stay of 45 days in Malaga in Andalusia to learn Spanish, several weeks in European capitals for simple fun, then the turning point: 7 days cycling from Ravenna to Nice.. at that time started our dream: We do really the world tour by bike?!